If you want to see an image properly please middle click on it then it will display in a new tab.Labels are at the bottom of the post in yellow. Click on them for some more useful information.
Click here for HAWORTHIA AND SUCCULENT AUCTION

The English translation of the specific latin epithet "ligo" is "to tie or unite" . To my view this is the first species that links Haworthia silviae ( pygmaea argenteo-maculosa) to Haworthia fusca from Albertinia. I use the epithet "silviae" since "argenteo-maculosa" lacks clear locality data and also was never properly described. ( As per Dr. Hayashi - private communication)

Very approximate location of Haworthia ligo. The town on the left is Albertinia. 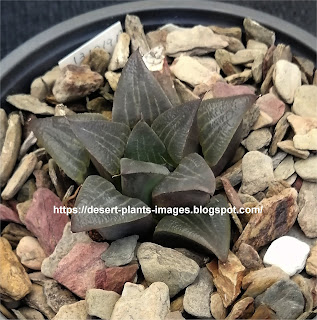 Both H silviae and H fusca are probably themselves links between Haworthia pygmaea from the Mossel Bay area and Haworthia retusa from the Riversdale area respectively. Those that like to lump species together may want to consider many of the Haworthia between Riversdale (or perhaps even further west) to around Mossel Bay in the east as a single species. Odd ones out would  likely be splendens, esterhuizenii and vincentii to name but three.  Lumping would not be an adequate solution however, as it will only cause confusion. 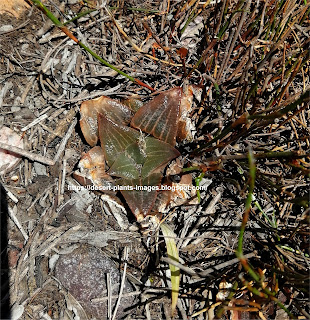 In habitat
It also highlights the danger of  presuming that certain plants are varieties of others when there is little evidence to support it. (Haworthia pygmaea var. esterhuizenii, also vincentii = esterhuizenii as per MBB Bayer) Haworthia esterhuizenii  and vincentii might well not belong to the pygmaea group at all and it is possible they would have a  happier association with Haworthia splendens. Giving them each species status avoids having to make changes later.
Haworthia ligo is very rare in habitat and very difficult to find.
No formal description yet
More data and images will be supplied with the official description.
Posted by Karoo Hoodia