Gasteria brachyphylla var brachyphylla is by default quite an attractive plant. I found this one some years ago between Calitzdorp and Oudtshoorn. I was particularly impressed with it's abundance of white markings or spots. Also the markings are white and not greenish white as is so often the case with this species.

It is named after the Appaloosa horse which has many spots, often white.

A few years ago I decided to go back to the plant to see if I could find seed.. Unfortunately the plant was destroyed. Probably by porcupines. There were some dead leaves lying around and only one leaf was almost dried out but not completely dead yet. Not having much hope I tried to revive it and fortunately it managed to set root. By now (Nov 2020) it has produced three small offsets. 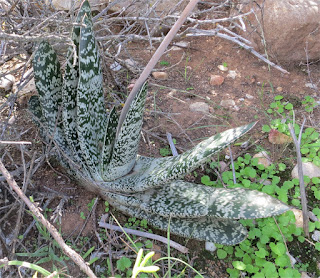