Euphorbia multiceps ssp. tanquana is widely distributed in the hot arid areas from the Tanqua Karoo in the Northern Cape, westerly to the Ceres Karoo in the Western Cape. Some of these areas have a very low rainfall and such sparse vegetation that they can be considered real deserts.

Close to a farm dam in the Tanqua Karoo I have seen some large specimens grow to a height of 50 cm or even more. Usually the plants are 30 cm or less in height. 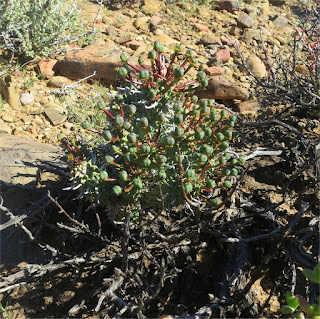 The type Euphorbia multiceps ssp. multiceps borders on the tanquana form loosely in the southern parts of the Karoo north of Matjiesfontein and reappears towards Springbok in the Northern Cape. In between these limits ssp. tanquana is found.

The plants differ from the type form of Euphorbia multiceps in that the cone shape is less stable and the plants take on numerous forms. The branches (fingers) are generally relatively longer then in the type, and the thorns are sometimes brownish but this is not always the case. (There are numerous forms of both types of Euphorbia multiceps that I have not seen and some of this information is certainly open to debate.) 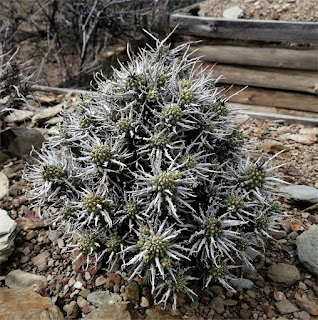 A plant with white spines. 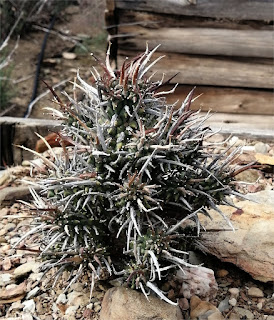 In this case the new spines are brown.

The flowers are bisexual and are similar to the type multiceps. The involucre glands are reddish brown initially and turn to brownish green as the flowers mature. 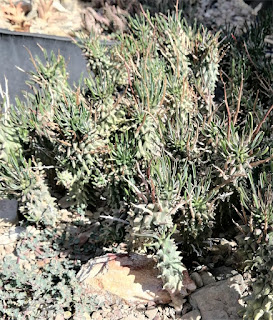 Hot summers and light conditions are essential and some drought stress between watering may avoid early death to some degree. The minimum recommended temperature in winter is probably around - 3 deg Celsius.